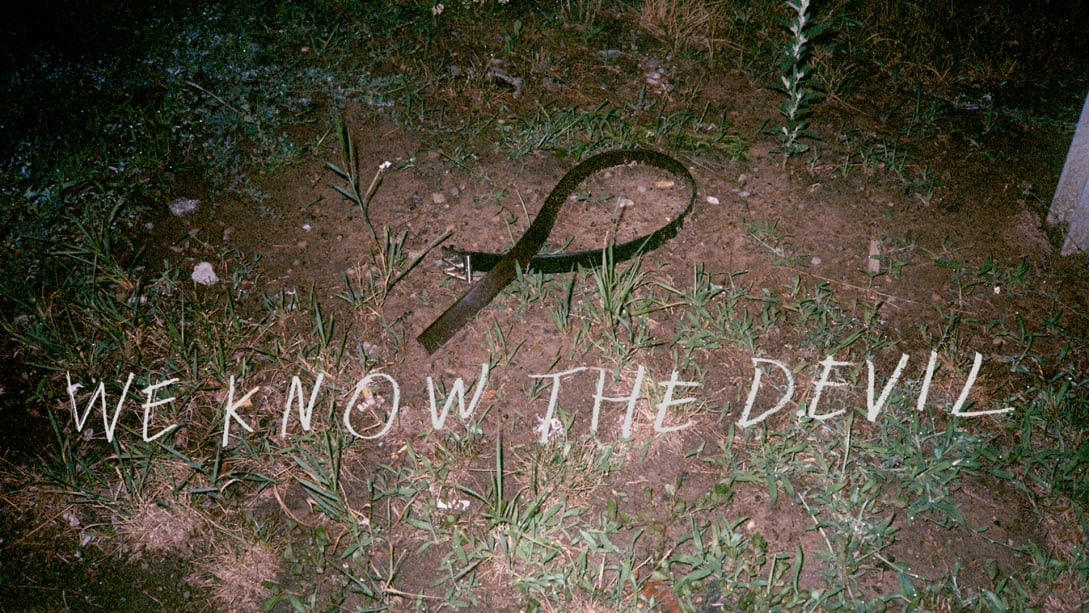 Neptune: Some things can't be taken back. There are things worse than saying it directly, you know.

Neptune: Exactly, what are you thinking saying things like that.

Jupiter: I'm not saying them. 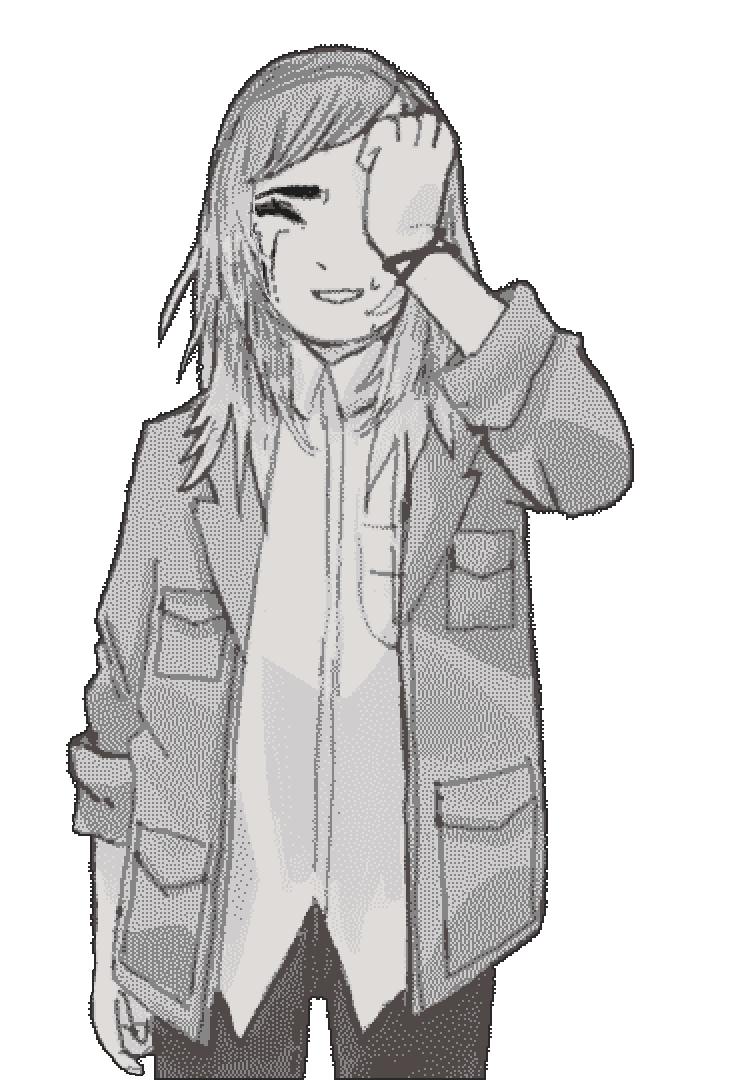 Jupiter: They're things anyone could have said about anybody. 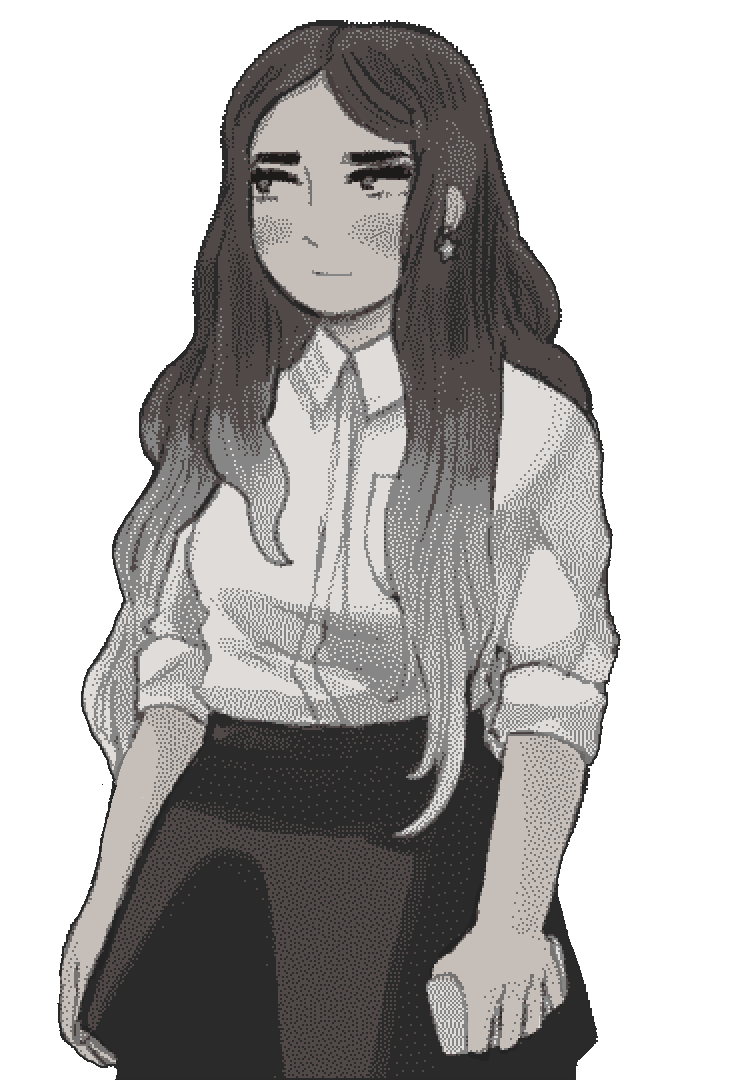 Jupiter: They're just in the air.

Jupiter: "You mean so much to me."

Jupiter: Anyone could have said that, about anyone.

Jupiter: Not that I'm saying it.

Neptune: The midwest is great. All you have to do is not say it out loud.

Neptune: It's like a spell. And you can be as obvious as you want about everything else.

Neptune: You can wait it out forever. As long as you don't say it.

Jupiter: I hope I can.


"[We Know The Devil] is about being weird and queer and wrong and hoping against hope no one will find out when the actual, literal devil comes for you."

We Know The Devil by Aevee Bee and Max Schwartz follows three teenagers at a Christian summer camp where children who misbehave are sent out to a cabin in the woods to meet the devil. Don't be scared though, there is nothing to fear when there is two against the devil, and the devil only ever gets one moment.

We Know The Devil is the first game made by developer Worst Girl Games, and came out in September of 2015. I was 17 years old, and entering my senior year of high school. This game has burned itself into my DNA since then. It's not an exaggeration to say that WKTD is a key factor in the ways I conceptualize queerness, religion, and art as an adult. Ask any of my friends who I've made play this game, and they'll testify to the fact that almost everything I make loops back to it. It would be embarassing if WKTD wasn't such an incredible game.

Our heroines, Venus, Neptune, and Jupiter, are three kids in a magical realist Christian summer camp. Each camper has a radio, and both God and the Devil can be contacted through radio waves. Their group gets selected to "Meet the Devil" and must survive a night in a cabin in the woods, where the devil is sure to appear. They pass the time, through doing chores, playing games, or just talking and complaining about all the shit they have to deal with. Through the game, you make choices about which two characters get to spend time with each other, and which character is left out. The isolated character, at the end of the night, will be revealed to have been the devil all along.

The devil, it turns out, is what one becomes when they embrace their true self, both their identity, and their feelings of dissatisfaction with the system they find themselves within. Each character, upon revealing their role as the devil, undergoes a physical transformation, cracking open skin and tearing off limbs, light shining from within them or ichor oozing out from every orifice of their body. In the three normal endings, the two good characters oppose the devil, rejecting her transformation and staying true in their desire to be good. In the true ending of the game, all three characters choose to become the devil. They embrace, and begin to fight back against the rest of the camp.

"The rest of the kids are coming for us, with god and the radio, ready to undo our wish. / But they will not. They won't touch us. / One moment is all we need. / To share, to yearn, to carve us into the world. / There is nothing to fear when there is two against the devil. / But we can't wait to see what they'll do against the three worst girls since Eve." 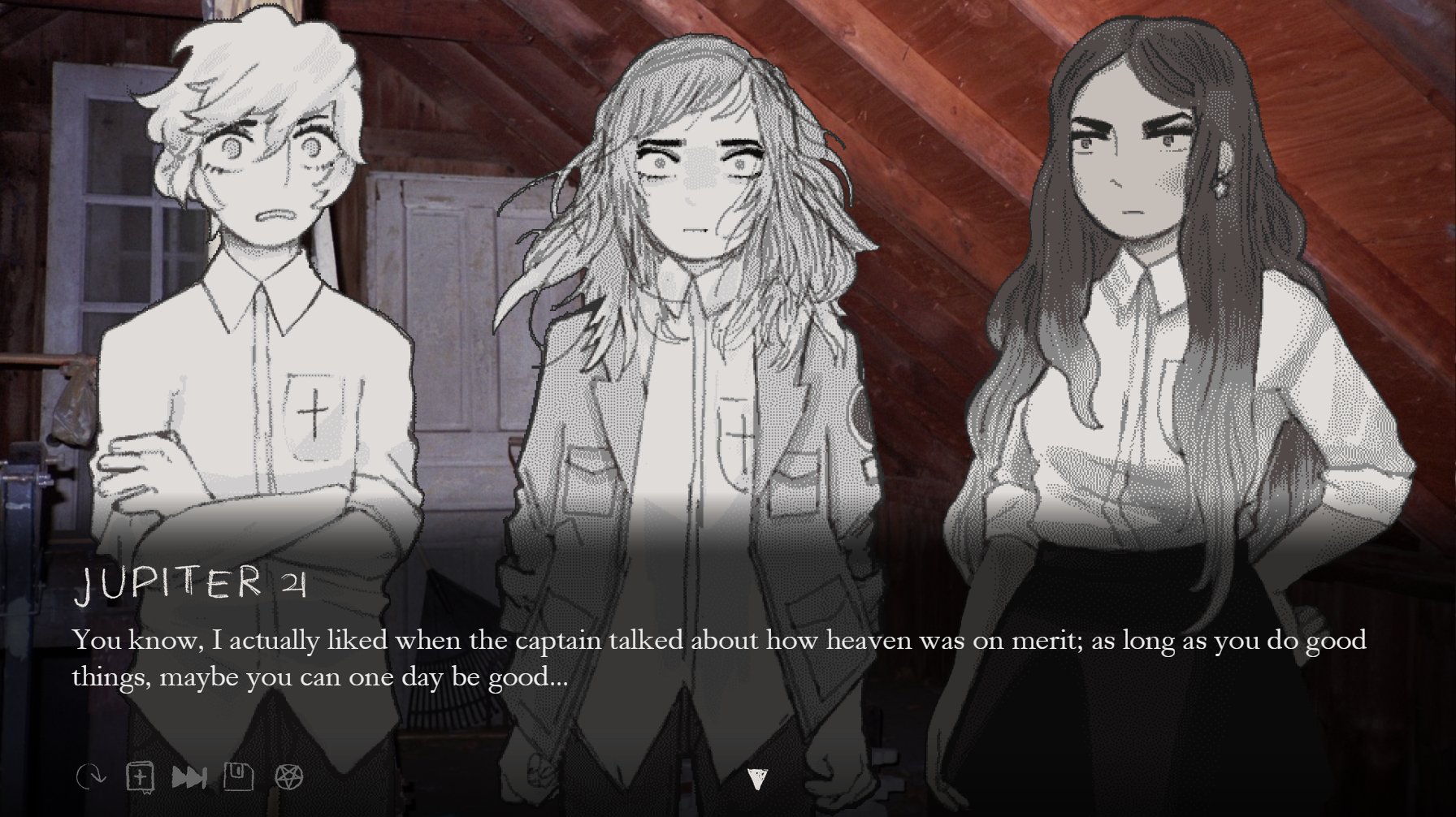 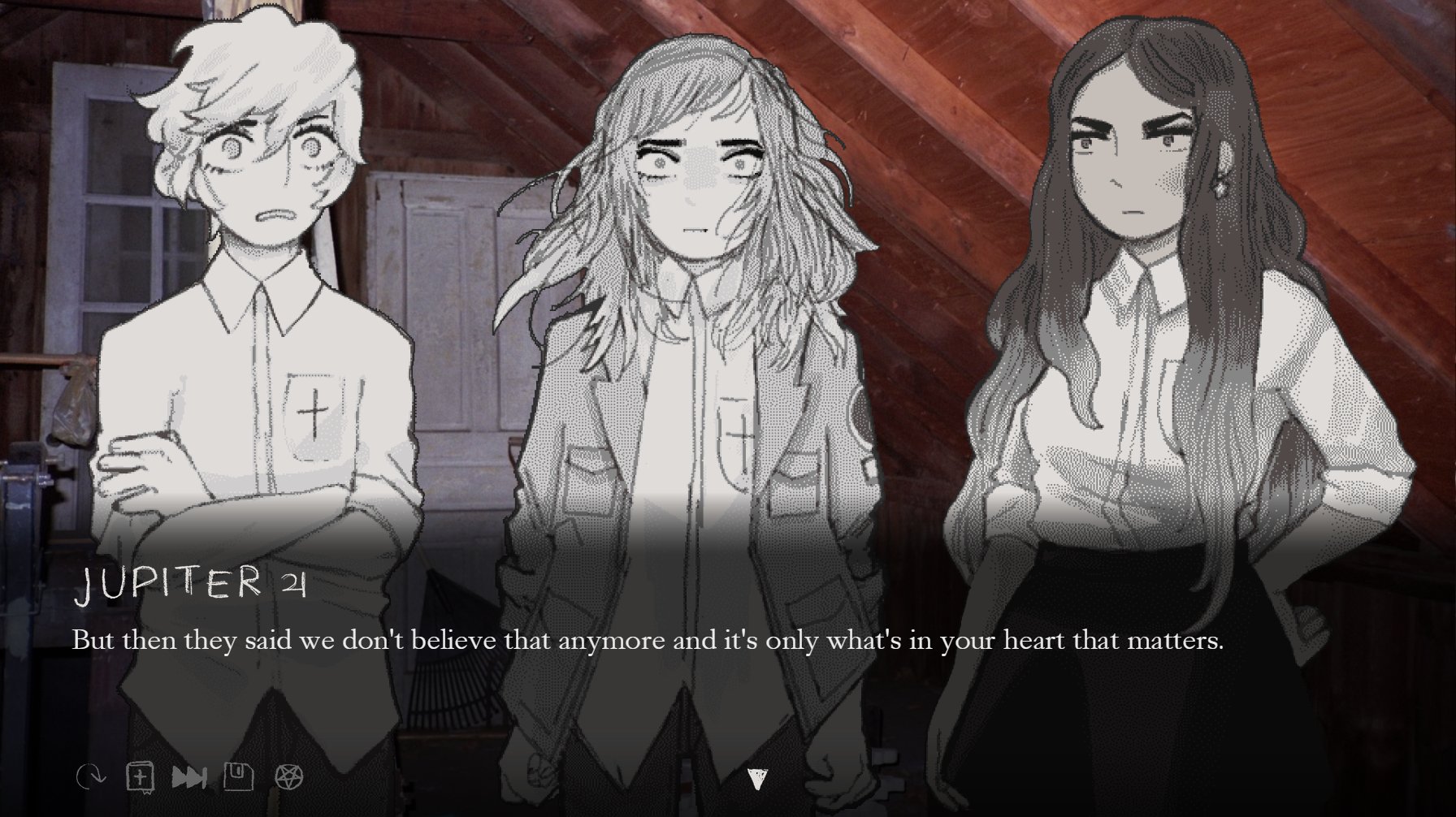 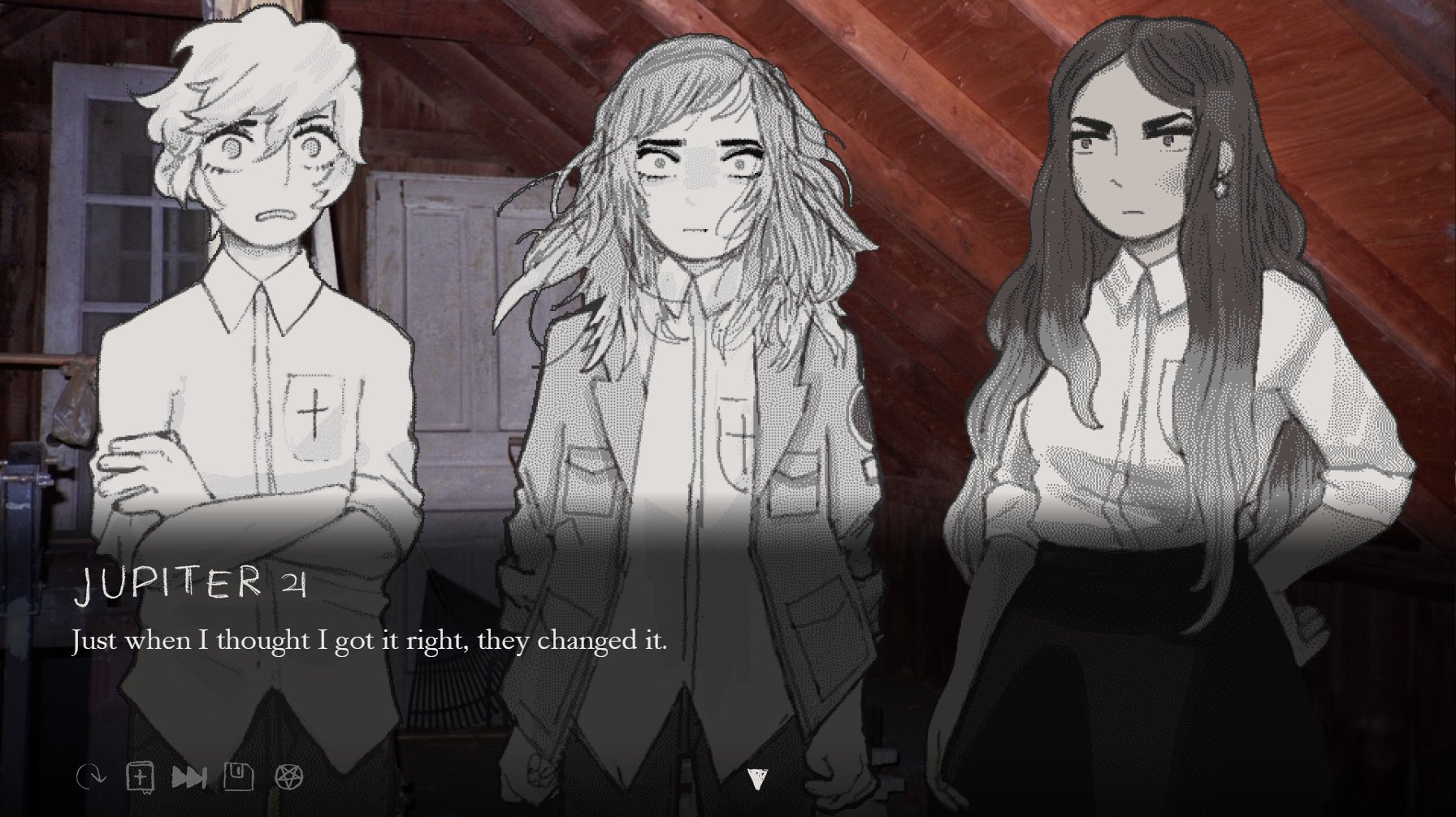 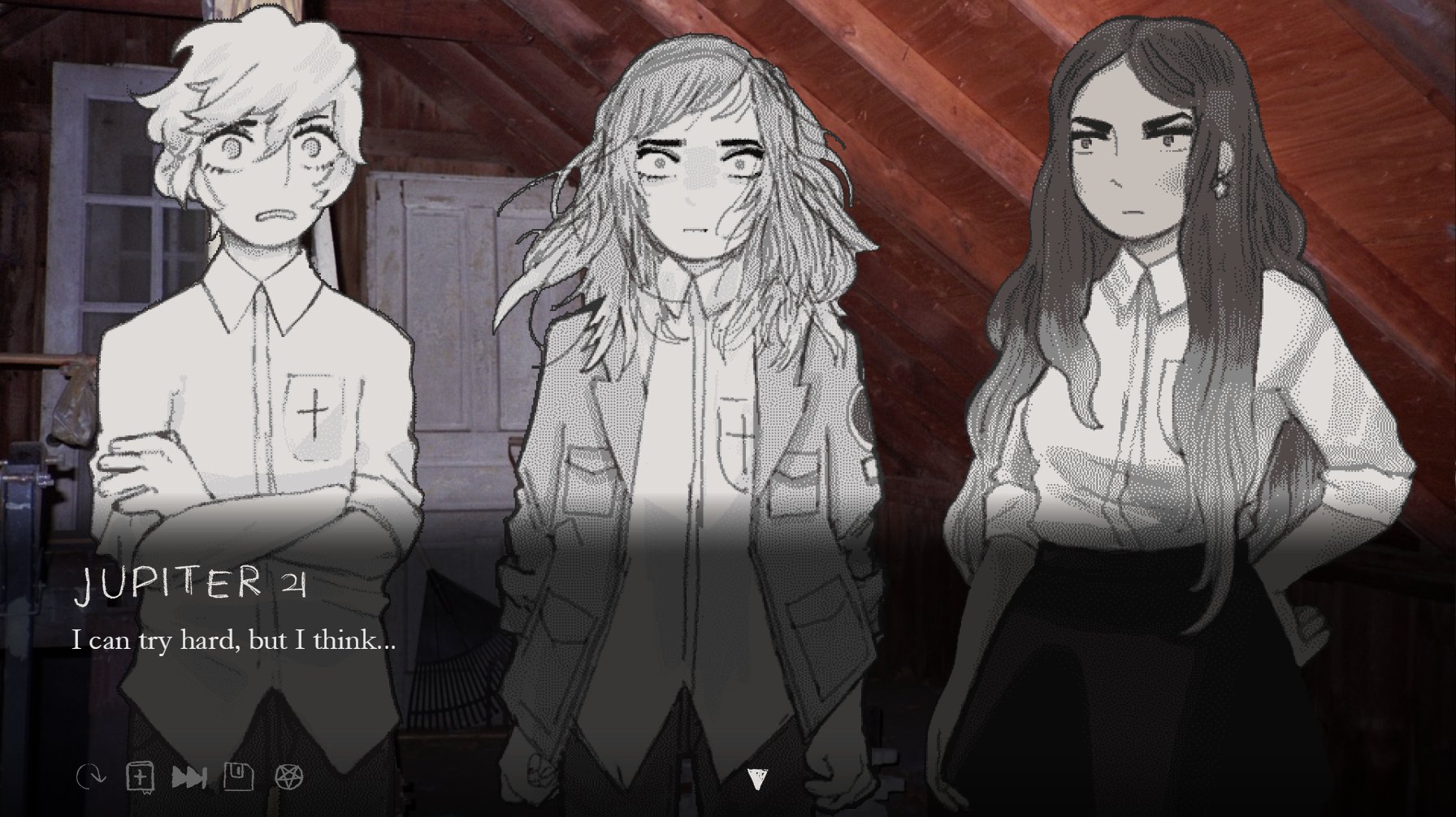 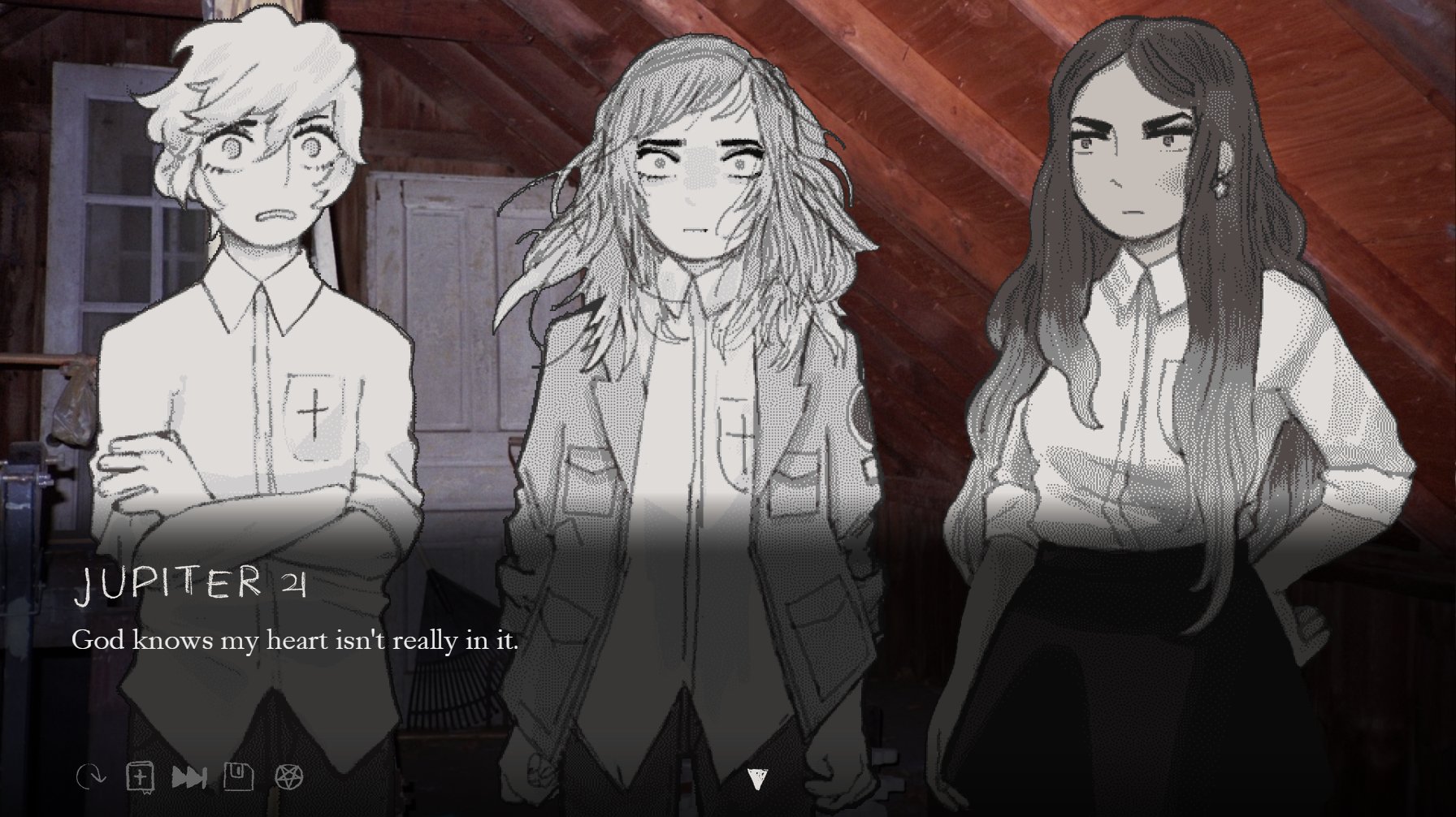 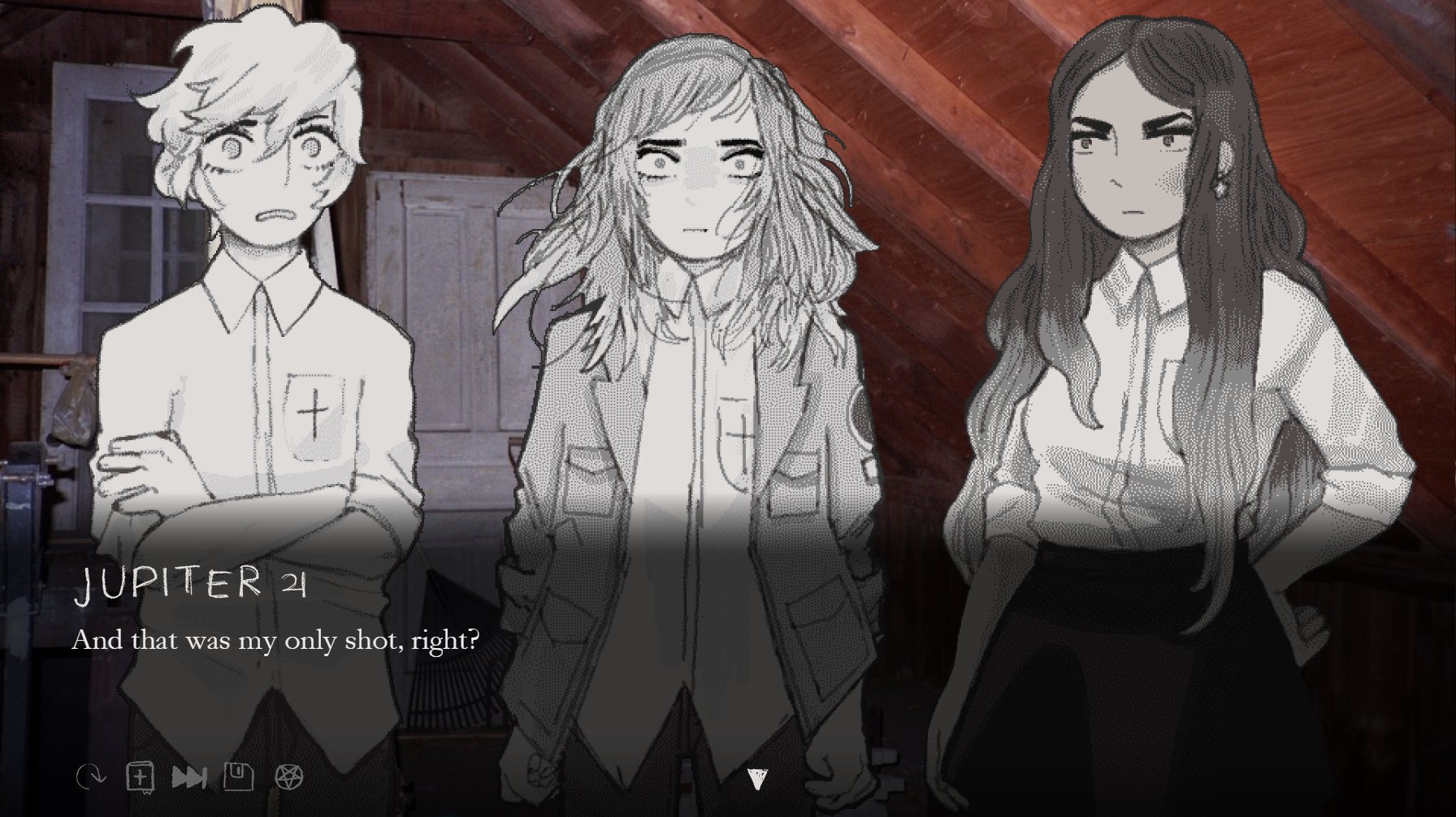 Of the three girls, Jupiter is the one I relate to the most. I sympathise with Neptune and her anger, I empathise with Venus and her desire to be seen, but I RELATE to Jupiter and her bone-deep need for acceptance. This part of her speech before transforming into the devil hit me hard. I remember following all the "rules" in church as a kid. But when you get older you start questioning your beliefs. And how I grew up, it felt like questioning anything about god would damn me eternally. I tried not to think about it, because thinking would just lead to more questions. I remember being 13 and getting scared, thinking about how I should go about killing myself, so I could die with at least a bit of my belief intact. Because Jupiter is right, you can do or say whatever you like, but God can see into your heart.

Then there's the whole concept of "There is no fear when there is two against the devil" To me this feels like, "There is no fear when there is someone worse than you, and another person is there to witness it." I get it. I grew up in it. I understand lying to yourself, hiding who you are, and throwing others under the bus to protect yourself. Thankfully I never did anything as terrible as outing someone else, but I remember doing little thing to make myself appear better. Commenting on other's innapropriate appearances, disavowing certain beliefs, performing disgust at the appropriate targets.

One somewhat silly example that sits with me is when Undertale first came out. I was obsessed with the demo, sharing it with my parents and asking them to buy it for me the second it was out. I fell in love with the game, but one thing that scared me was my parents finding out that it depicted a lesbian relationship through the characters Alphys and Undyne. I thought I could just keep quiet about it, like other things I liked, but Undertale got really, REALLY, popular. My younger brother expressed interest in playing it, and I got irrationally scared that he would somehow out me to my parents if he did. So, I took my mother aside, and told her she shouldn't let my younger brother play Undertale because it has lesbians in it. My brother still remembers this, and though there was no ill will caused by the incident it shows how fearful I was of being found out, that I would act as some form of homophobic censor just to save my own gay skin. It's... funny... in retrospect, that that happened after I had already watched a playthrough of WKTD on youtube. I wasn't a very self aware teenager. Then again, who is? 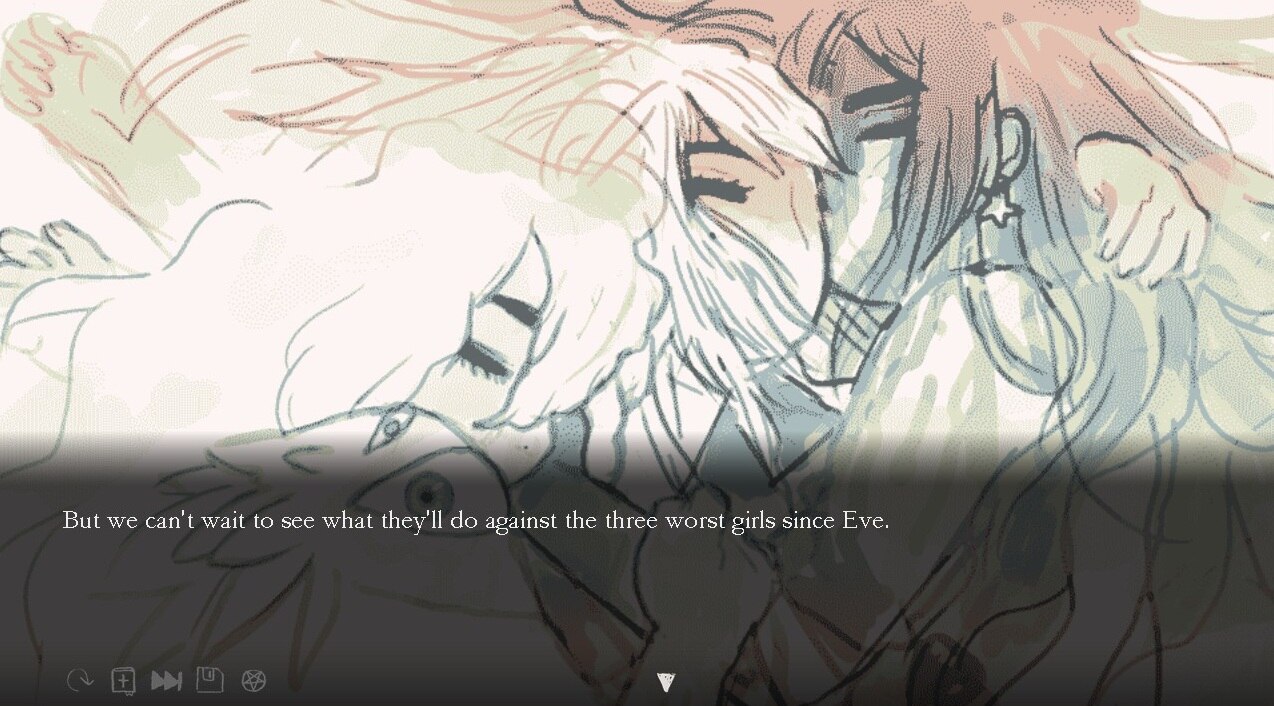 When I first saw the true ending of this game, it felt like the most dangerous art I'd ever encountered. Baptist Christianity tends toward extremely literal interpretations of the bible. Allegory and metaphor exist, but only really when they're convenient. Growing up, I read most things very literally. This game challenged that perception, and made me pay attention to what a story was really trying to say for the first time in my life. To see a game equate my sexuality with Satan cut me like a knife, but I knew the game was made by queer people, and was approaching queerness from a sympathetic angle. Something was going on. The words the game used, "good" vs. "bad," "god" vs "devil," weren't being used in the way I was used to. It was my first time experiencing media that clearly asked you to look beyond the surface. It's not exactly profound or groundbreaking in the large scheme of things, but it was accessible, relatable, and honest.

Plus, let's be honest, the game has a lot of cool stuff. Weird vague worldbuilding, physical transformations into otherworldly forms, loud, abrasive music... So many of the themes, plot beats, and images burned themselves into my psyche and affect pretty much every piece of art I make now. I basically can't touch any story without it becoming about either religious trauma or violent physical transformations, lol. One of my friends jokes every time WKTD comes up in conversation that it's one of the key puzzle pieces people need to figure me out as a person. When another one of our mutual friends plays the game for the first time she'll ask them, "Do you understand Alannah better now?" ^_^;